Lyrics company Musixmatch has released an extensive study around past winners of the Song of the Year Grammy Award, using machine learning to predict who is the most likely winner of the 2016 edition, which is taking place next Monday (February 15).

The first Award was handed out in 1959, and since then 295 songs have been nominated for the award, of these 58 won.

For the study Musixmatch analysed the word count of each of the songs, noting that the total word count for all the nominated songs in a given year rises by an average of four words per year. Lyrics are certainly getting wordier, but also more repetitive as the unique word count is only rising by one word every year.

The wordiest song to ever win was Johnny Horton’s “The Battle of New Orlean”, however Meatloaf is the wordiest nominee for “I’d Do Anything For Love (But I Won’t Do That)”, with Eminem following closely behind as the nominee with most unique words. 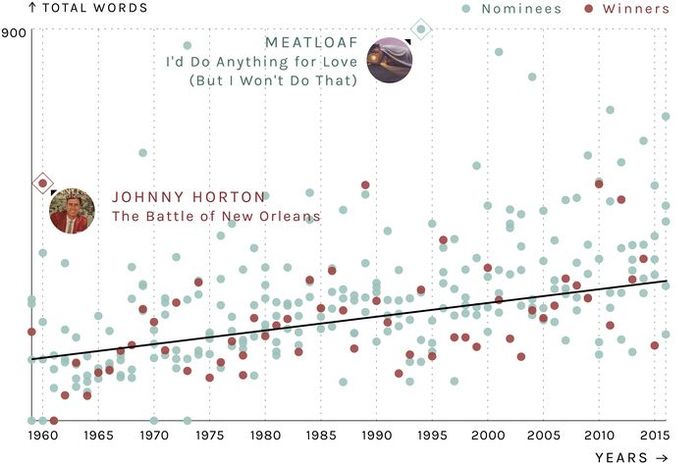 The company fed all its data on lyrics into a machine learning model developed by Google and although the process is mysterious to the layman, this contributed to the final prediction.

The company found that the key of A major was the most used by winning tracks, followed by D major, C major and F major. Interestingly a very small number of nominated and winning songs are in a minor key.

The study also takes into account the “danceability” factor, calculated by taking into account a number of factors including tempo, rhythm, beat strength, regularity and more, finding that nominated songs have become more and more “danceable” over the years.

Finally, the company used a complicated machine learning tool to throw in all sorts of data around past winners, then compared that data to that of the 2016 nominated tracks to figure out the likeliest winner.

The Most Probable Winner of the 2016 Grammy for Song of the Year is Kendrick Lamar with “Alright”. Little Big Town’s “Girl Crush”, Taylor Swift’s “Blank Space” and Wiz Khalifa’s “See you Again” come second, third and fourth respectively.

Ed Sheeran’s “Thinking out Loud” is classed as the least probably winner - a surprise given how popular he is in the USA (n.b. the study does not take popularity and social media presence into account).

Musixmatch states that the predictions are to be taken with “a big pinch of salt” since there are too few data points to build an accurate model: regardless this study provides some interesting facts around Grammy winners trends over the past 58 years.